I know, I know another top whatever post for 2015, but we are going to do something a little different this year! Every year we sit and mull through thousands of photos trying to decide what will be in the portfolio for the coming year. We're changing it up this year! We always have our personal favourites, for various reasons, so instead of showing just portfolio images, we are going to show you our favourite personal moments of 2015 Starting with Steve!

The 2015 season was unique. We had the worst drought in years, with 4 rainy weekend weddings (that seemed in a row!) PLUS we had that crazy smoke cover with the forest fires. In spite of all the seriously unpredictable events, we took these things in stride and made the best of circumstances and got some amazing photos with some amazing people many of which we consider friends well after the wedding day.

Here are my Top 15 of 2015 plus Courtney may add a couple bonus photos!! Here they are in no particular order!

Although they can be a little more than cold...we love winter weddings! Thankfully Bryce and Melanie got married in a warm little church before heading down to Neck Point for photos! As they walked down the aisle for the recessional, everyone blew bubbles! Bryce & Melanie lit up, and it really made the scene pop with the magic of what it is to walk back out the aisle as husband & wife! 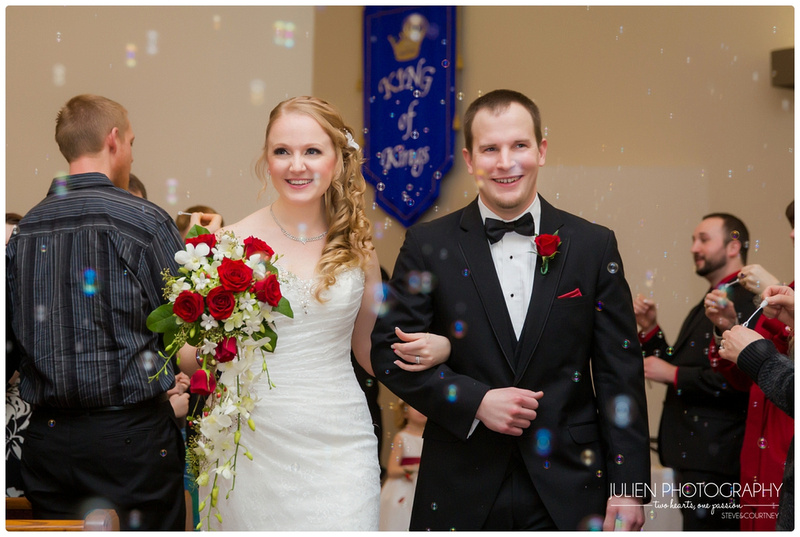 One of the first weddings of the summer season, and the end of a wedding day it was so refreshing to sit down and share a pint! Guinness is Courtney's favourite beer, so we couldn't possibly leave the Crow & Gate without sharing at least one with two awesome Californians! I love this image because it feels so candid, and because right after I shot this, we all sat down, reminisced about their wicked day, and finished our beverages together.

This year I thought about fire and ice a lot...Probably Game of Thrones related. I can hardly wait for season 6 to get started!! I've shot with ice before, and wanted fire for this time around. I had to borrow a few boxes of matches (thanks Smoke Rings!) and then headed to the underground parking lot. I'm sure tourists thought I was an arsonist in a suit. I love the blues and fiery red orange contrast! It was difficult to setup, but it all came together in a blaze. This photo earned "Best Detail Photograph of 2015" at the Vancouver Island Wedding Awards this year! 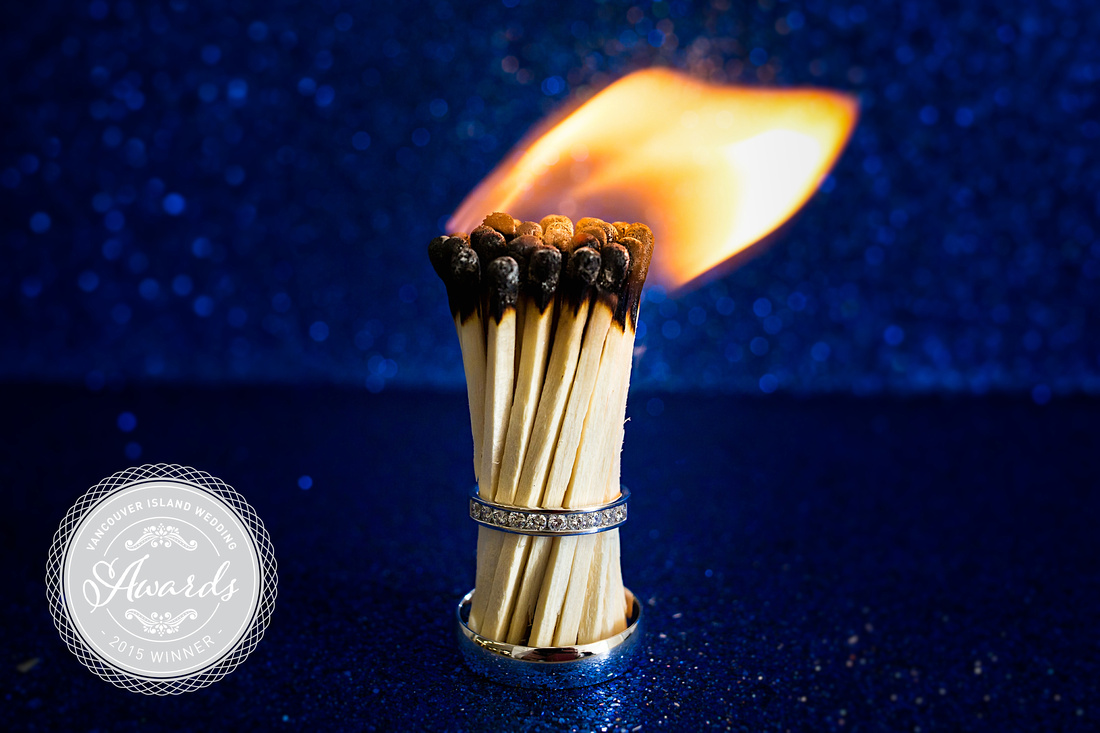 This is a perfect example of me requesting Courtney to do outrageous things to help me get the shot! We planned out the shot earlier at Tigh-Na-Mara and each headed to our respective positions. Land was running out as the tide was coming in! I could see it, but I feel pretty sure Courtney couldn't. She setup the light, gave me the thumbs up and then tossed Breanne's veil and launched herself out of the shot! I simply asked her to duck, but as most of you know, Court usually does the opposite of what I ask, and she launched herself into the shallow ocean instead! We were all killing ourselves laughing, it made the photo much better and way more entertaining for the rest of us!

I remember the night before Hillory and Bryce's wedding was crisp and clear, and I said "Wow! Its going to be a perfect, sunny day tomorrow!"...Then we woke up to the apocalypse. The forest fires from the drought brought in a thick bed of orange smoke, covering everything. Sepia is not our favourite look, imagine our white balance shock when every photo looked orange & brown. We'd been aching for years to work at Hatley Castle, this was not going to interfere! Thank goodness for post processing! The bottom left photo is straight out of camera so you can see how thick the smoke was. The other two images are the magic of Lightroom. I love them all.

I always get to hang around the guys in the morning while they get ready. Greg's was a funny bunch of guys willing to do just about anything. There were so many laughs, that the only almost serious moment I was able to get was underscored by a cute chihuahua. I chose black and white for this image because there's nothing more timeless then and man and his little dog. 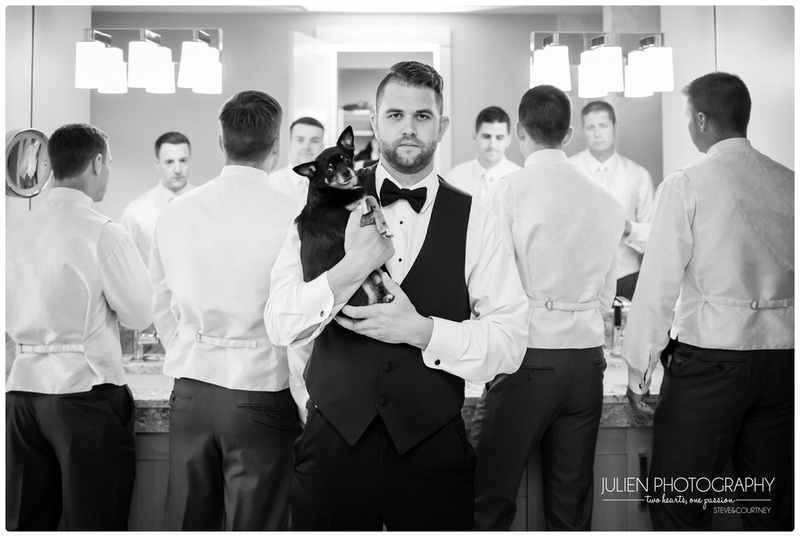 Greg and Kelbree were the first couple to experience the infamous "Rainy Wedding Drought of 2015", and it didn't get them down! The outdoor, tented reception lasted way late into the night and we danced until we could stand no more! I wanted to showcase the night rain with a simple yet stunning spotlight. Though you can't see my ninja wife, Courtney is holding a lightstand with a blue gel over it teetering on the edge of a high rock. I asked them to replay their first dance on the beach, and came out with this shot of them dancing in the rain at night! 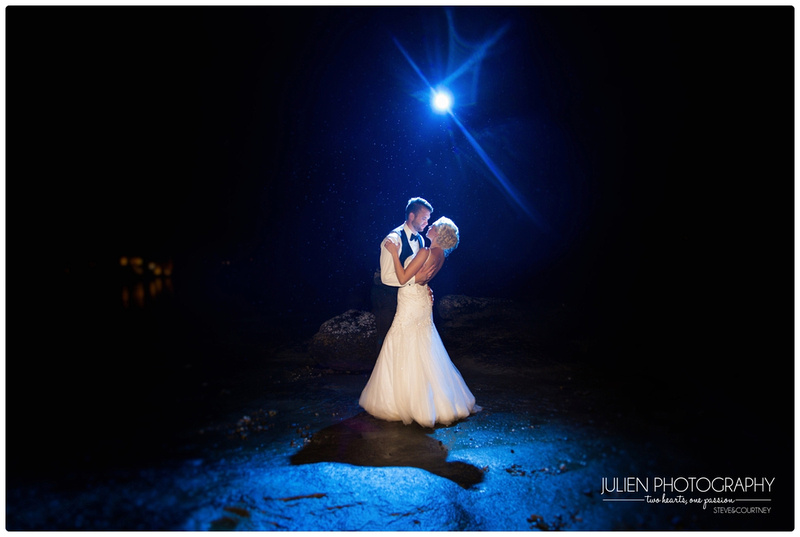 This was arguably the hottest wedding of the year, with a gorgeous couple, beautiful speeches, and amazing guests. Their reception was at an inner city paradise, Abkhazi Gardens in Victoria. Tim & Jacqueline were keen on having a night shot, so while there was still light, we planned this one all out! I love night portraits because I get to feature what I think adds to the scene or the emotion of the shot. It takes a great deal of set up and composition to get an image looking exactly how you imagine it! Can you guess how many lights were used fro this photo? 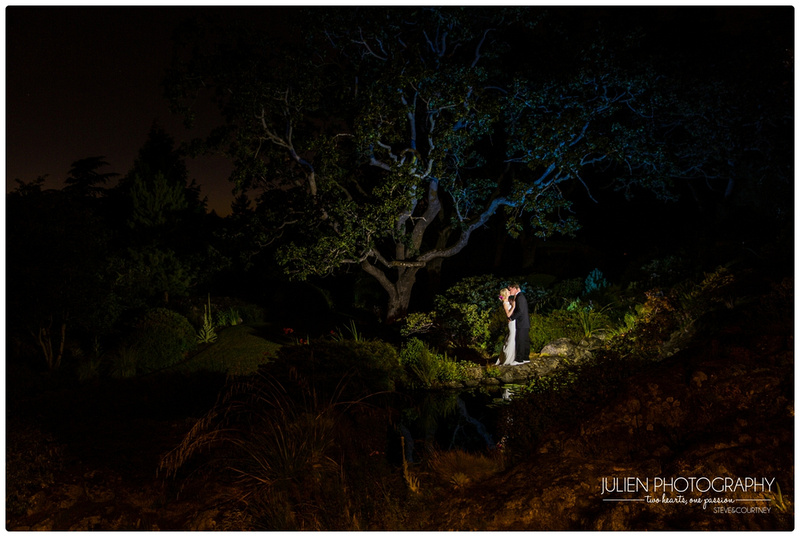 There were 5 lights used!

1. On camera right, Courtney is holding a led flashlight box to add a kick of light and help focus. Again, she's on the edge of the rocky cliff as close to the water as possible. And I kept asking her to get closer...oops!

2. Courtney is also holding a flash at low power, aimed at the couple

3. I turned on the outside porch light to add the orange hue on the front rocks

4. A speed light under the tree in the back with a blue gel to accent and frame the couple

5. A speed light to illuminate the background behind the big garry oak on the left to add some depth to the image.

We had the privilege of being not only photographers, BUT witnesses for Matt & Miranda's Mount Washington elopement! We loved getting to know these four and working in Strathcona Park at the base of the mountain, in front of a fresh mountain lake! Everything really came together for this shot! The light, setting and even the dogs worked to make it one of my favourite shots of the year! 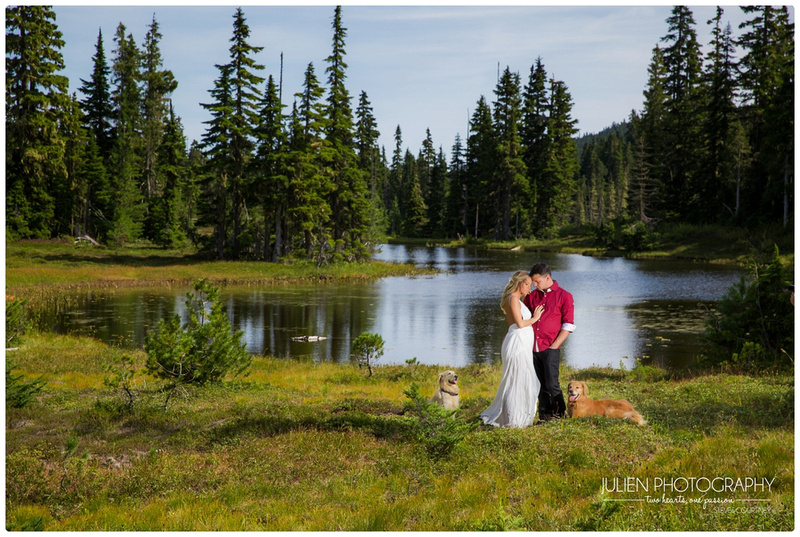 I used to ride horses by this field when I was younger, and I think about it everytime we pass it by on the highway out of town! I love the lone tree in the middle of this green field, its so grand and proud. I've always wanted to take photos here, so when Tricia suggested it, and her & Courtney approached the owner who okayed it...I was super excited! I love how this photo incorporates the circle of love! Tricia loves horses (John not as much!), John loves Tricia and Tricia loves John and horses :) LOL 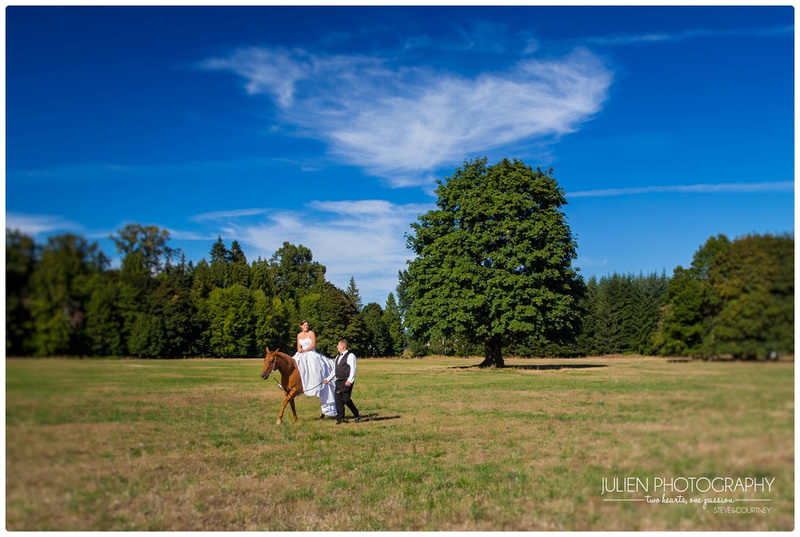 There I was taking romantic pictures of Tracey & Ryan, when a whole family comes out on their back porch and plays "romantic" bag pipe music for us!! It was wildly entertaining and hilarious and made for a a genuine laugh in the photo to the right!

When Michelle told us about this swing down at the beach by her venue the Beachhouse, we thought that it would be an easy hop on a swing and go type photo... However when we got to the swing - it was a totally different story. The swing was an easy 6 feet above the ground, and double Michelle's height! Cam & I hoisted Michelle up, while Courtney steadied the bench, and we all worried about how this would turn out. Michelle is one tough cookie and pulled herself on the swing, not an easy feat in a wedding dress! One little push, and it was right out of a story book! 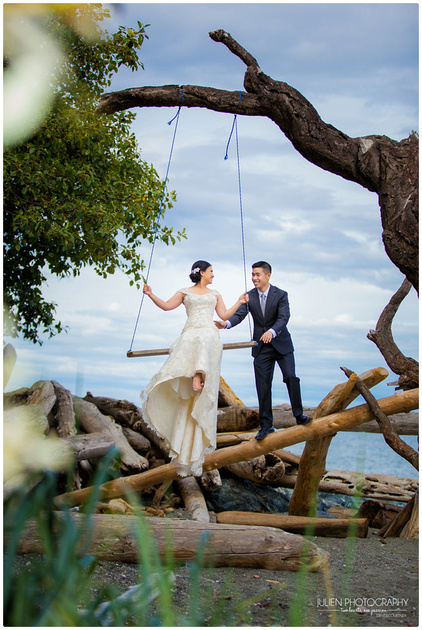 I remember being a little worried about the weather at Tanis and Nick's wedding day. Tanis' dream day included the beach. The morning of their day, the wind was whipping, the clouds were swirling and the sky opened up, and closed just before the ceremony began! West Coast weather perfection! We were blessed with the ceremony timing, because of course, 30 minutes after they said I do, the sky did what it wanted all along and poured rain! My favourite shot of the ceremony using as much serge red against a blue sky as I could find.

I loved Ian's enthusiasm about all things wedding! He knew ring set ups were one of my favourite things to shoot, and had all these crazy concepts that included magic! Courtney, of course, wanted the rings to float. HAH! Where does she come up with these ideas? LOL! Being a hobby magician, Ian had some handy techniques to float and levitate the ring, while his skilled groomsman wrote in the "Love" background. Technically, this photo took a lot of set up! We had to find the best way to levitate the rings, light them without exposing the trick, spell love backwards and hit the shutter! I love that this photo was a colaboration with the excited groom and incorporating his passion into the wedding! 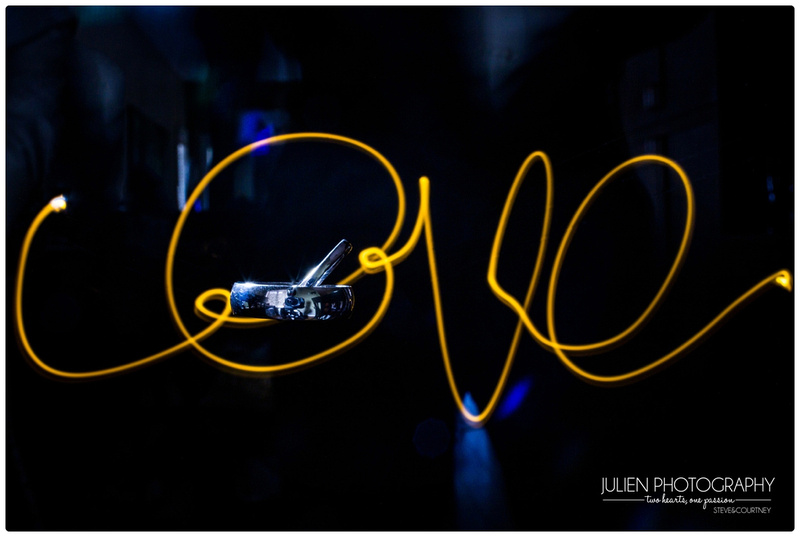 Again, in a summer drought, Ian and kirsty got a sweet sprinkling of rain! Even with a cold, Kirsty powered through and braved the final photo before we left for the night! We have won an award for a rainy night umbrella photo, and always wanted to do a full body version of the photo...but only if there was an interesting foreground! One of the greatest features at Sunrise Ridge Resort is the beautiful pond and waterfall at the front. Interesting foreground? CHECK! The scene is illuminated courtesy of a handy LED light panel, a flash in the front, a flash on the side to light up the rocks, and finally a light from behind with a wide angle panel to illuminate the rain across the whole frame! Loved setting this one up! 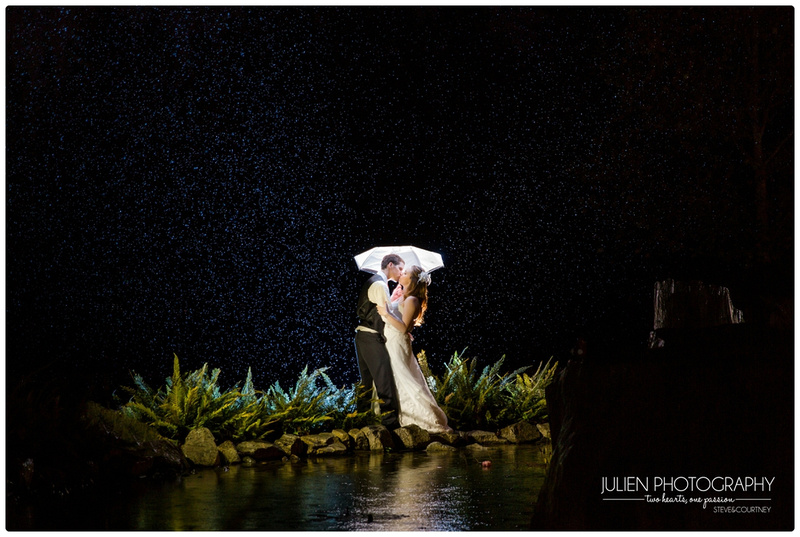 Brett & Karlie's Beach Club wedding was hard to pick just a few favourites from! There were some stunning shots on the beach, some hilarious groom and guys getting ready, motorcycles, crazy dancing and much more...but I really loved Steve's bouquet series from the reception! There is a solid build up of women fighting for it, catching it and finally the Winners dance!! This is a great example of waiting for the moments and clicking at just the right time!!

"I love everything happening in this image. Steve not only nailed the exposure, but again, he made me climb onto a cliff edge and hold the lights as close as I could get them to Brett & Karlie's faces. Then, after all that hard work he photoshopped me out! I love the framing of the couple, I love that you can see the foreground - the rocks at this beach are different from any other! The pose is really cozy and it looks like the cover of a romance novel! The sun was behind the couple, so the use of lighting was important to really make sure Steve got the full gamut of colour and depth in the scene, and it did NOT disappoint! In fact...I may be a little jealous of this shot, but in a good way :D I'm proud of my husband! 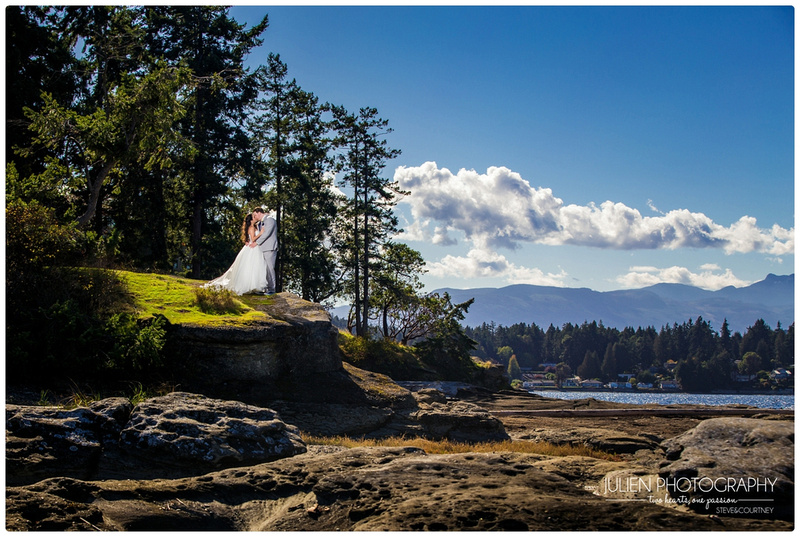