We love NIGHT PORTRAITS! Not only does the night time ambiance add a touch of romance, but also really helps to focus the photo on the couple. We love the challenge of working in a low light to no light environment, and having to create most or all the light you see, they aren't for the faint of technical heart! Our night shots typically require multiple flashes, LED lights, tripods, and often times even iPhones! While you're enjoying the party, we'll often duck out of your reception to get things adjusted and set up.

We've worked with everything from cars to Vegas lights...Here are some of our fave night shots with a little behind the scenes info about the images! We love incorporating elements into our night photography that are meaningful to the couple and the Vissers love their Volvo's! This first photo required a wireless flash behind the couple pointed upwards to fill the car and wrap around the couple, there was a small led by the dash to illuminate them, and a little pop underneath the car with another flash! 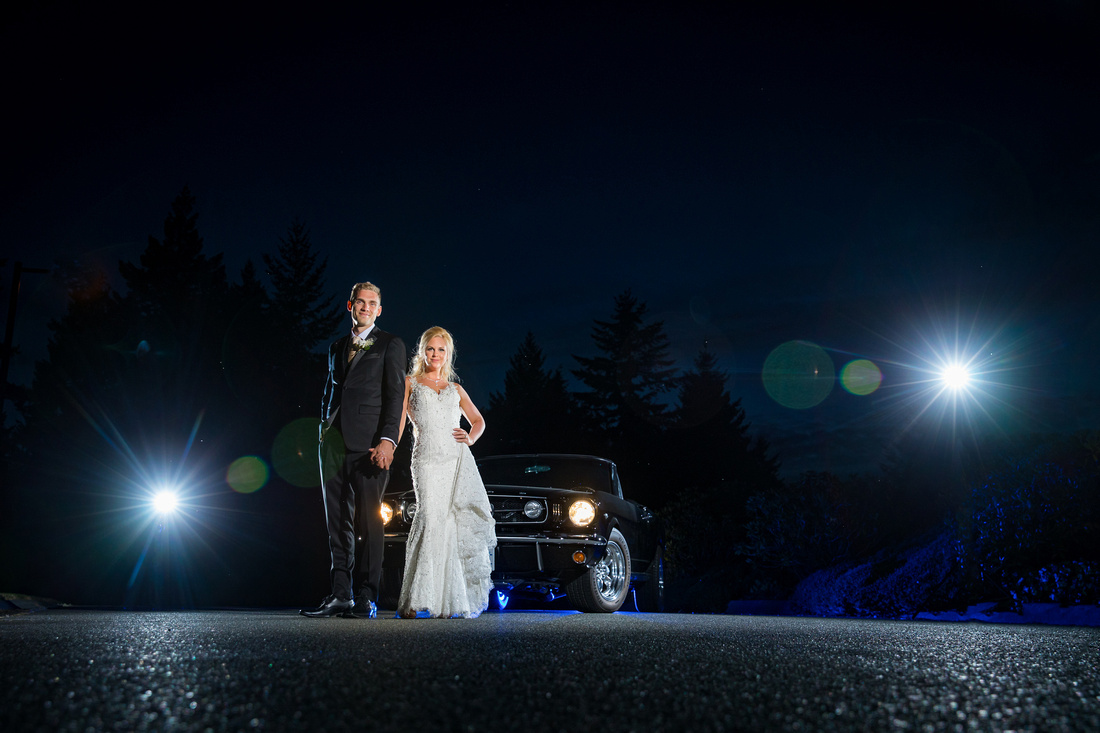 The family Mustang followed each of the kids around to their weddings - and it was gorgeous! For this shot, we felt it needed to be a little more fashion looking, so we put a flash with a blue gel beneath the car, two lights on stands for some drama and rim light, topped off with one to light Ron & Jackie! This photo still makes us feel like we were shooting a Hollywood movie! Harleys always look great, and it was Brett's dream to have his bike in photos on the wedding day! We set it up in front of the Beach Club, added 3 lights, showed off their navy wedding Chucks and BOOM! Magic in the making! If you've got a bike...bring it on! We're suckers for animals...so when we found out there was a sweet little photogenic pig at Birds Eye Cove, we got pretty excited! What better way to celebrate your day then with the perfect piggy! We kept it fairly simple with this two light set up, we used a back light to pop them from the barn, and combined a strobe with the modelling light for the front! 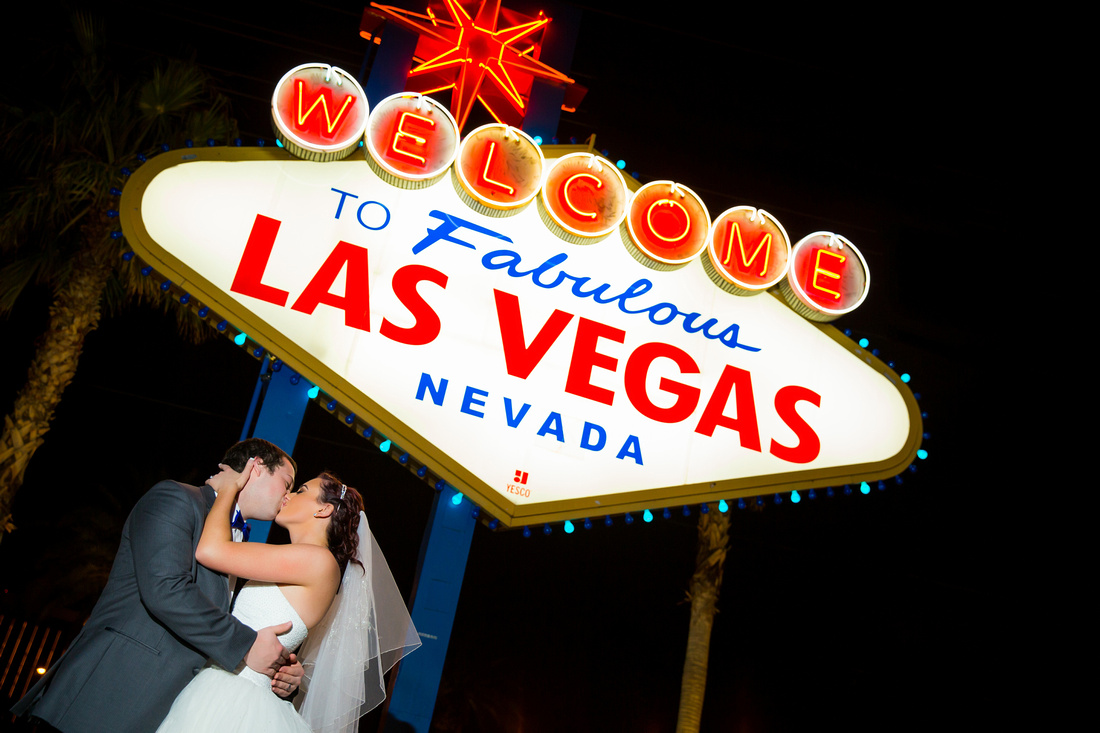 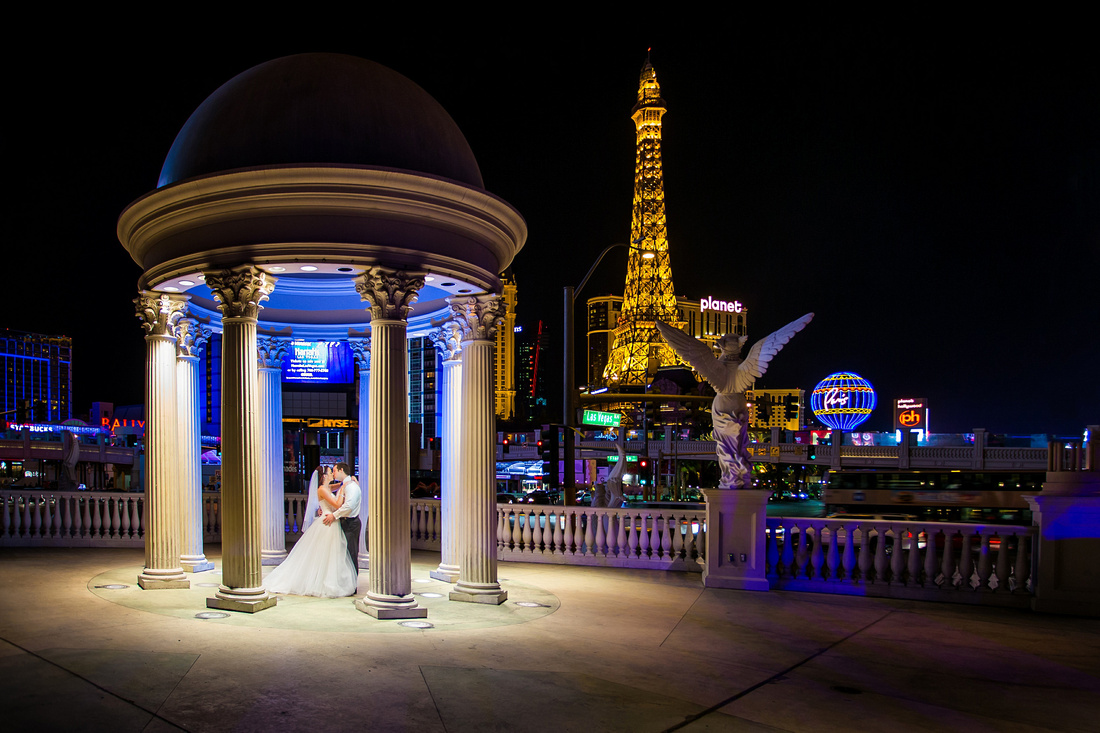 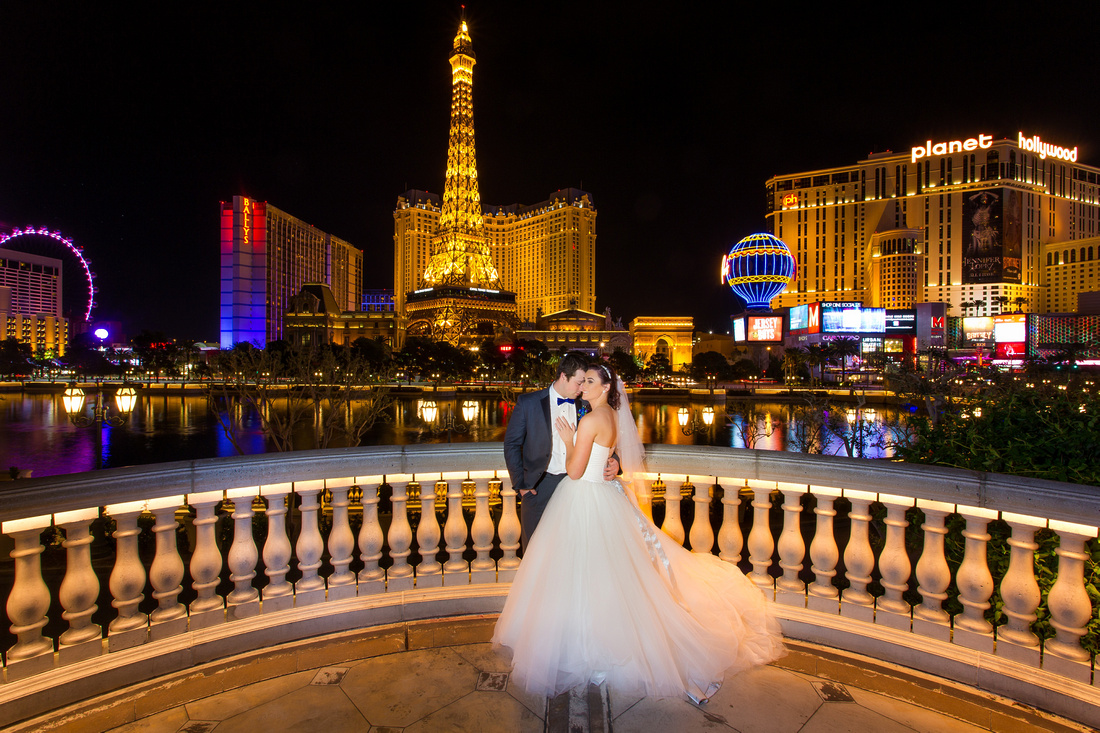 It felt like years of night photography led us up to this moment...photos of the Las Vegas strip! Although we'd spent the earlier part of the afternoon taking photos with Kyle and Cecilia around their venue, they were ready to roll the dice on some night photos before packing it in...after all, it is Vegas! We had a pack fairly light around town, so we had two flashes plus our little Lume Cubes! 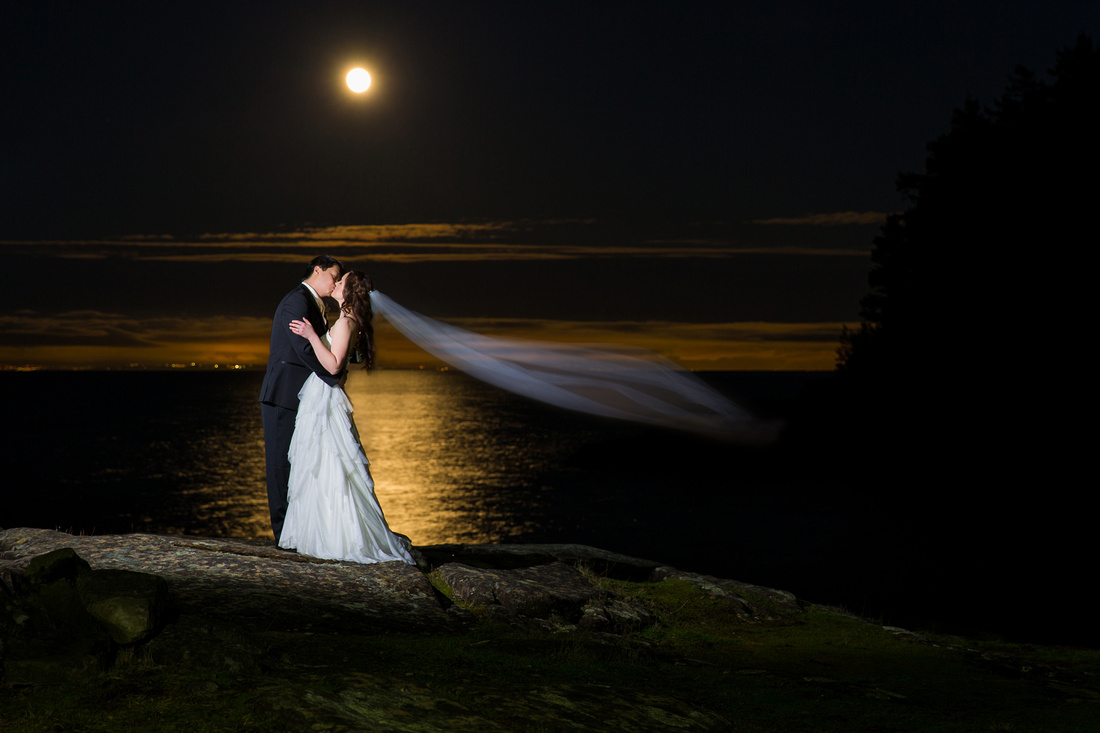 Dragon's Lodge is a stunning private property on Gabriola! The Lodge sits on the edge of a bluff with beautiful ocean views all the way across the Strait! When we saw the low moon shinning on the ocean...we got Vincent and Lisa out to capture the scene! We needed a slower shutter to get the moon across the water, so we used a tripod for the camera, a single flash, and one of us tossed the veil to make it extra romantic! 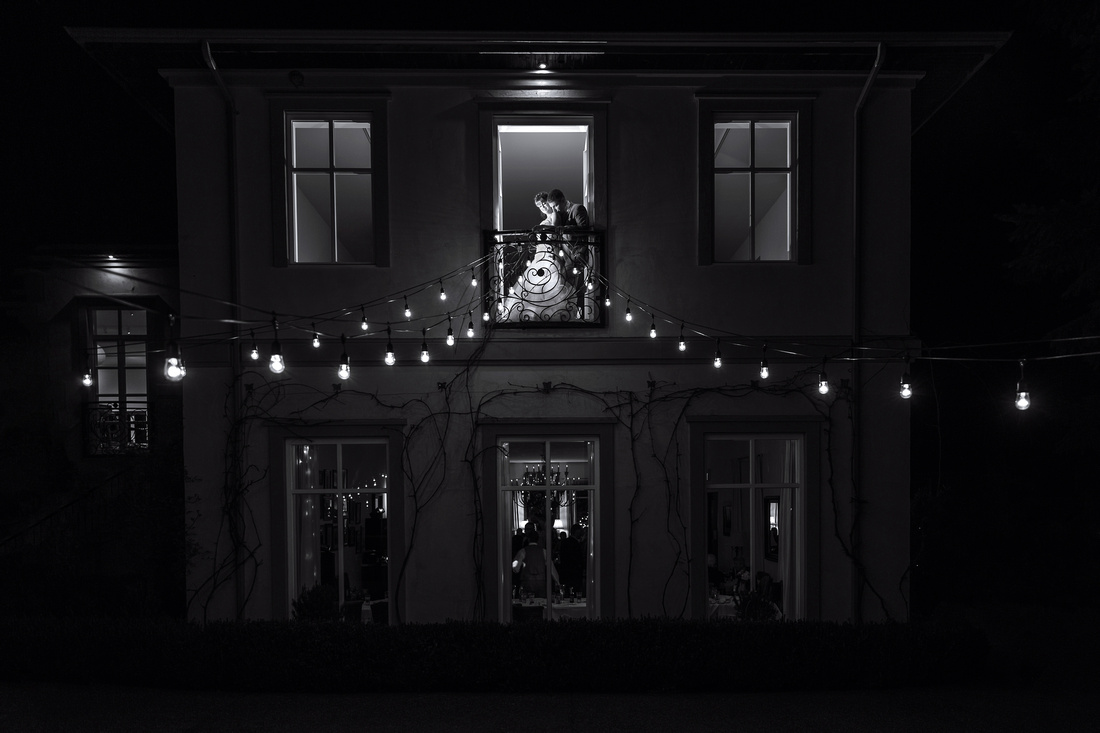 We are Cuckoo for Cuckoos! Since taking this photo, they've built a beautiful pergola - so this image is now pretty much impossible to capture! We had to rest a Lume Cube light on the rail to the left of Andy & Kim to illuminate their faces, and we popped a big strobe inside the room behind them to light the background of the scene! We love this quite moment and romantic Italian architecture  above while the party carries on below! One of our most recognized shots and one of our first major awards! Matt & Tianay had rain for most of the day, and while we were all keen to dry off - we had this idea of a romantic photo in the rain! Near the end of the reception, we went out to get it all set up, and wouldn't you know it...the rain suddenly STOPPED. We had jimmy rigged the light inside the umbrella, and were all ready to go bring M&T out. Cue sudden and unexpected feelings on the rain having stopped. Steve was about to call it a night, but I saw a nearby hose with a shower head on it...if the rain decided it was done, we would shower them with a garden hose! Ultimately...it worked much better than the rain, and we got them just as wet!  This photo earned us our first Silver Award on the International Photography stage!

OUR MOST VIEWED PHOTO! 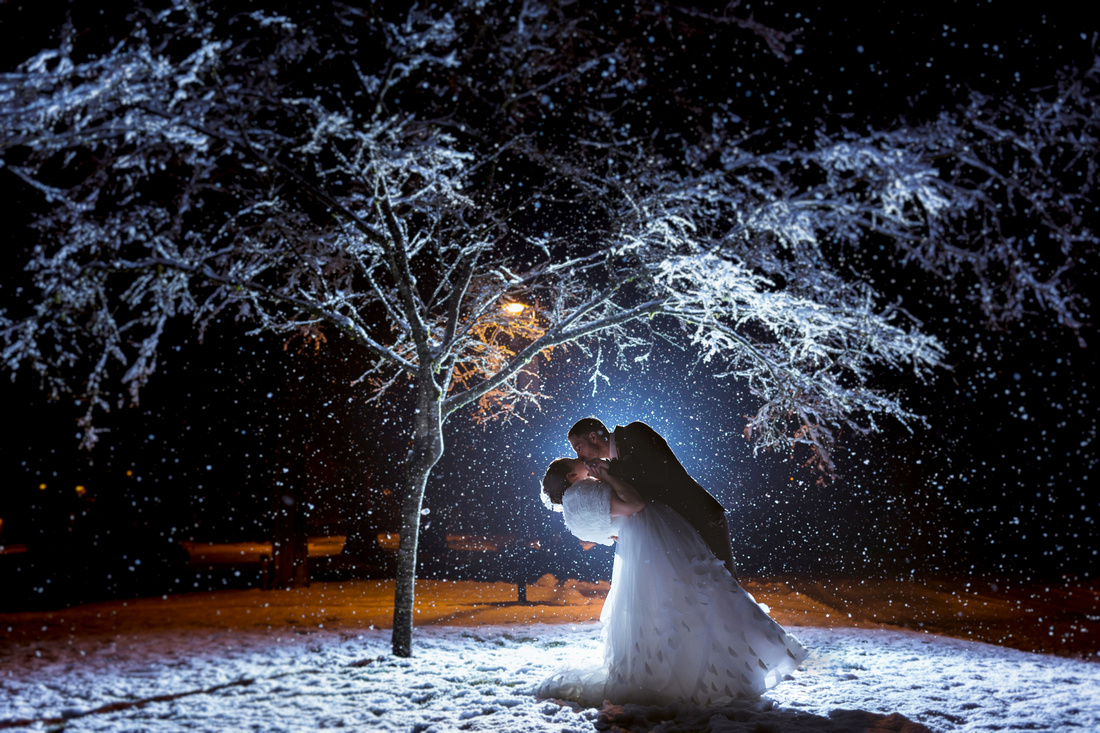 Our most viewed photos thanks to the HuffPost! Kim & Richies photo has been in the HuffPosts snowy wedding photo blogs, and has been seen around the world! Its amazing what the snow covers and makes look magical...in this case a parking lot and picnic pavilion! We saw the warm parking lot light, and loved the mix of blue and orange! We kept it uber simple with a single back light and a little light reflection from the snow!

STYLED SHOOT AT THE EMPRESS 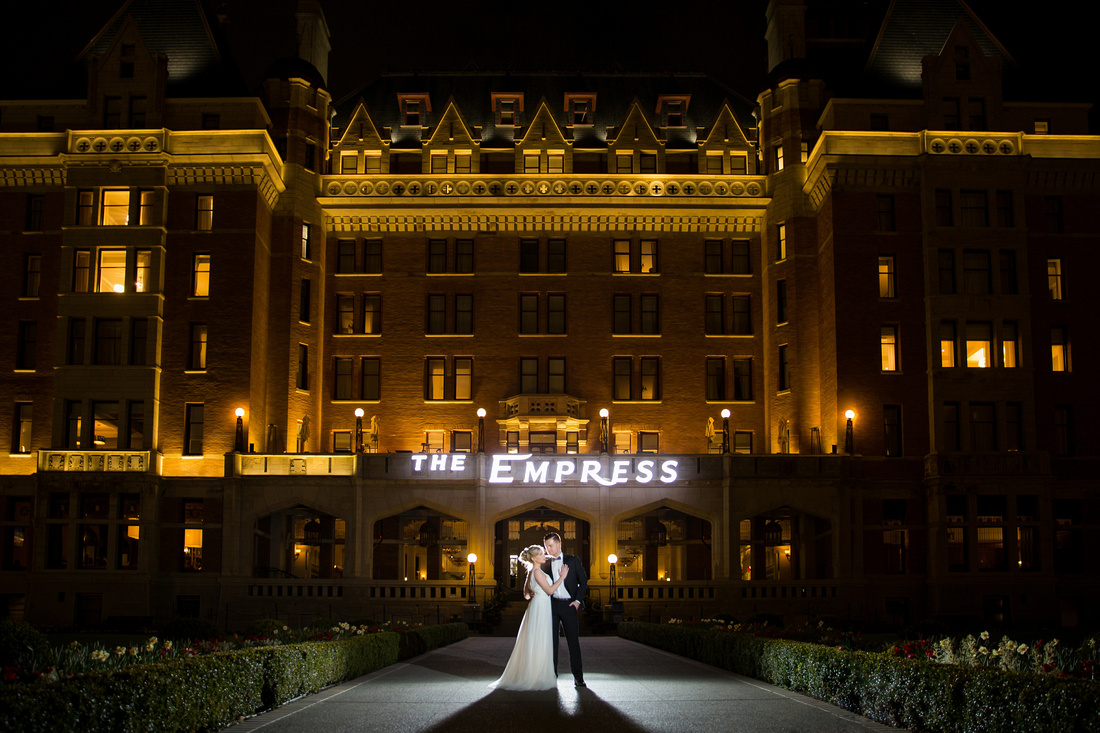 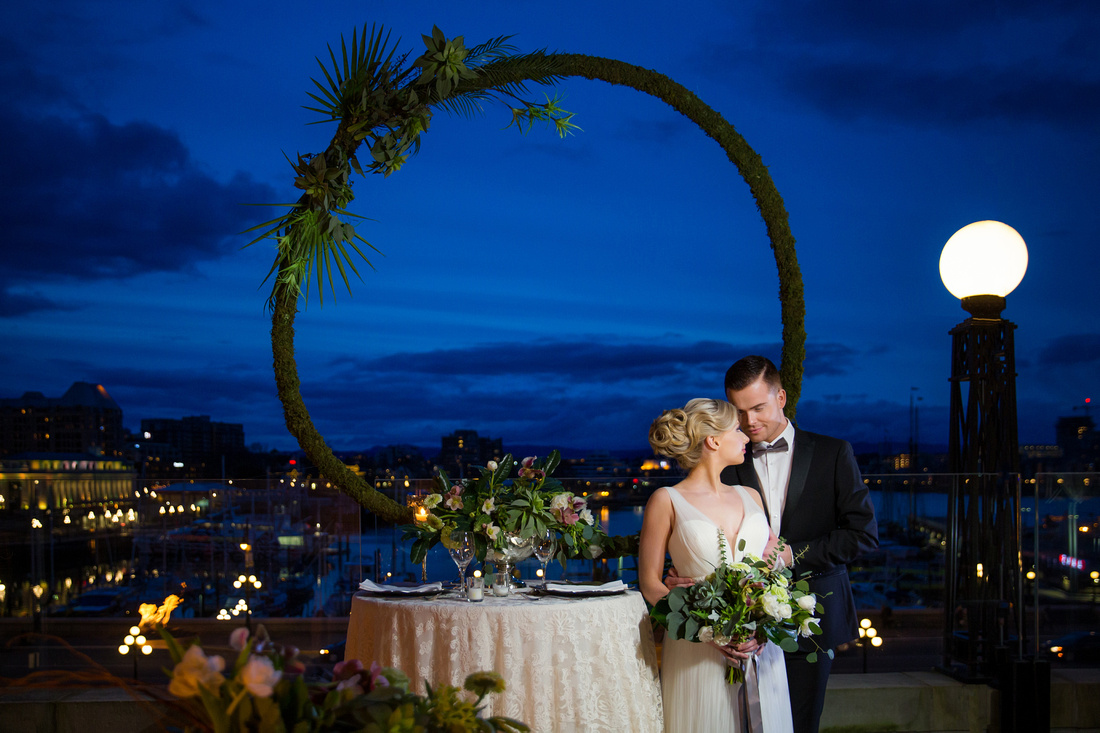 This was our first non-wedding, wedding photoshoot! We like to think the Empress chose us to do the night portion of this because we shoot at night so often! It was nothing short of magical to photograph on the private terrace at the hotel! 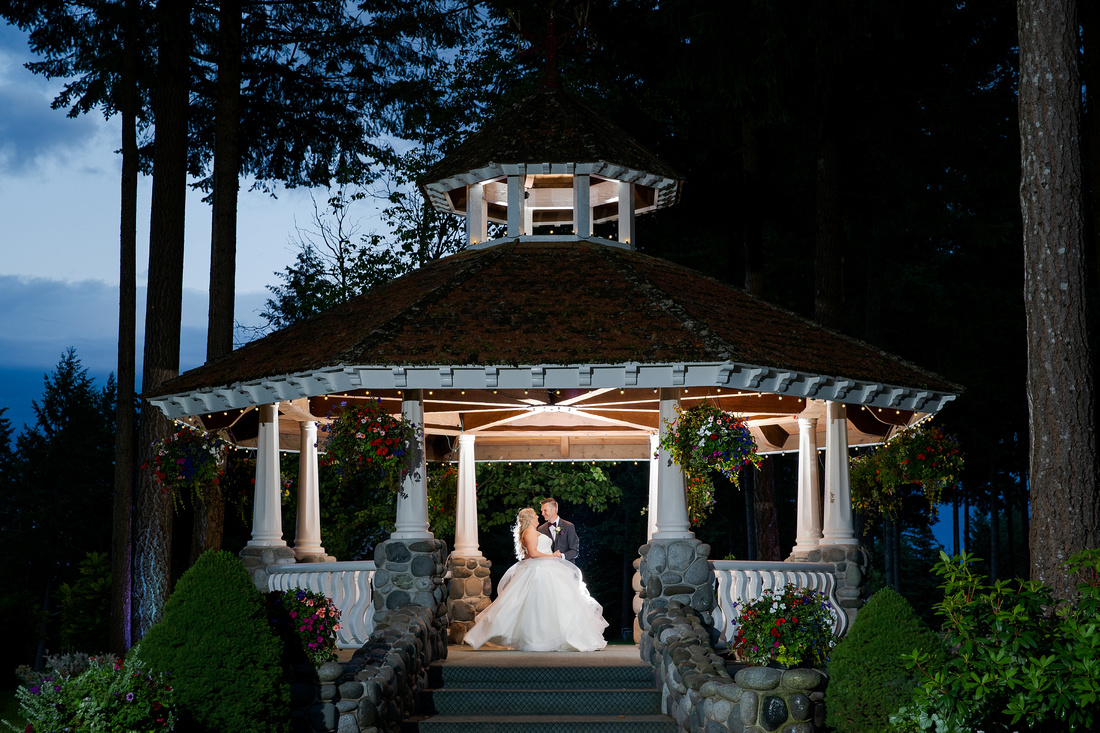 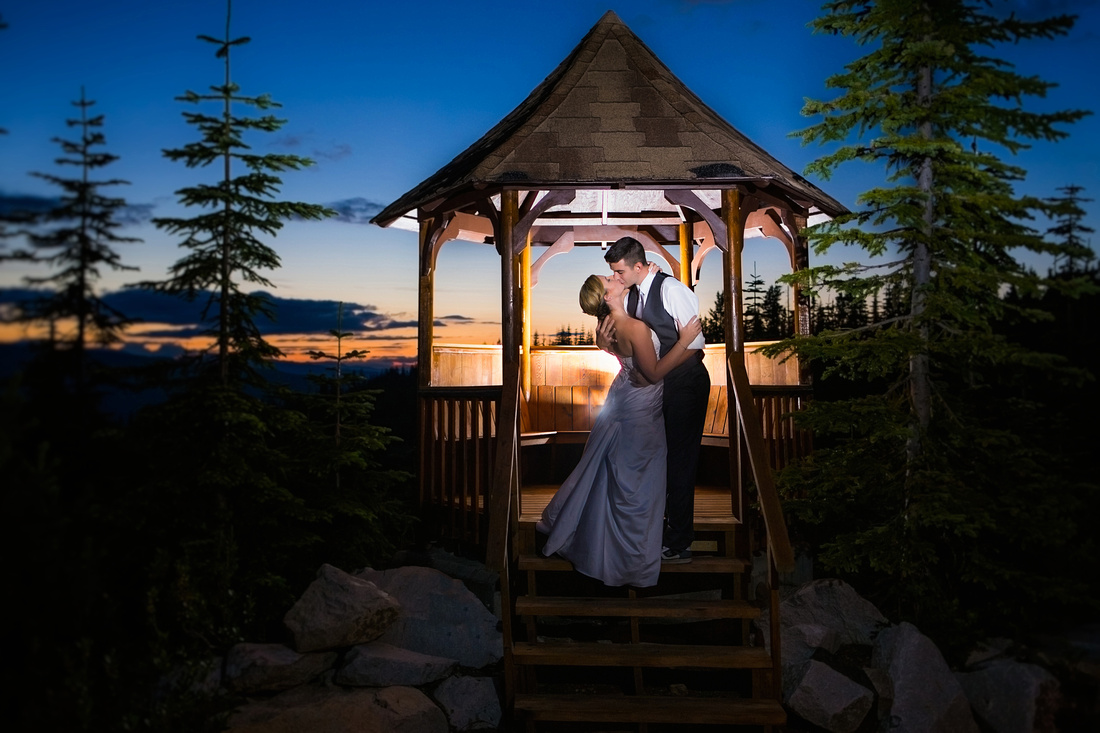 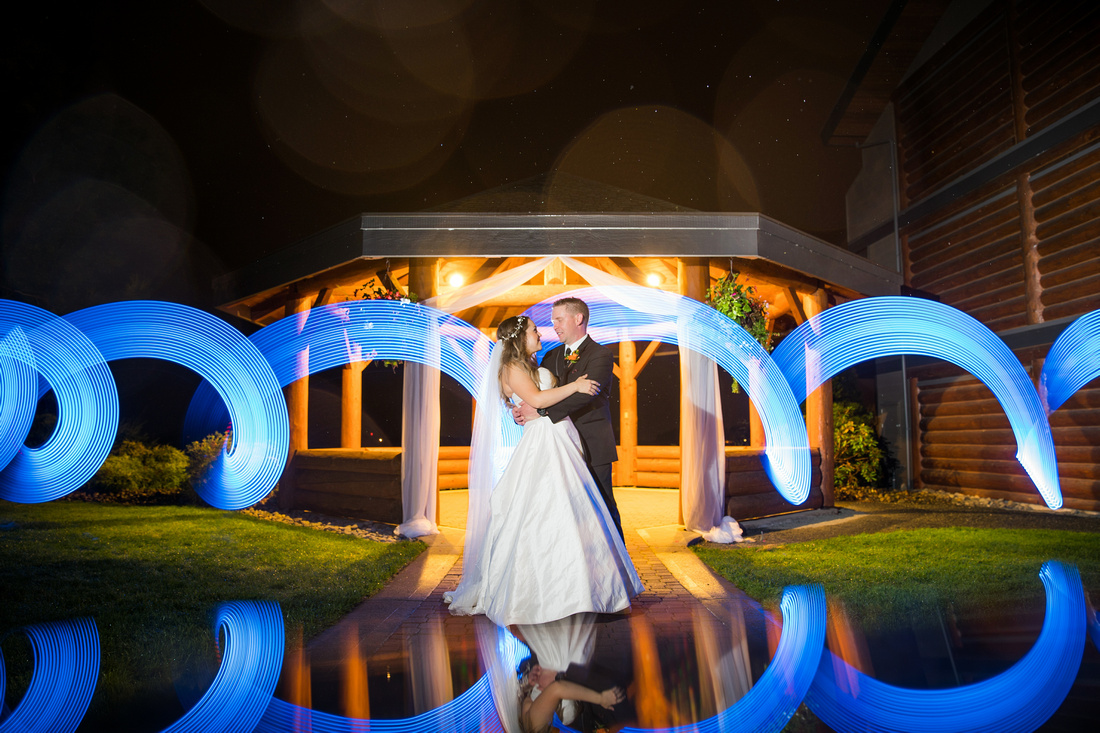 We are lucky to have some amazing gazebo's at our VI wedding venue's! Not only does the Gazebo work great for the ceremony...but at night it frames a couple, AND you can hide all your lights in the posts and really create something unique! 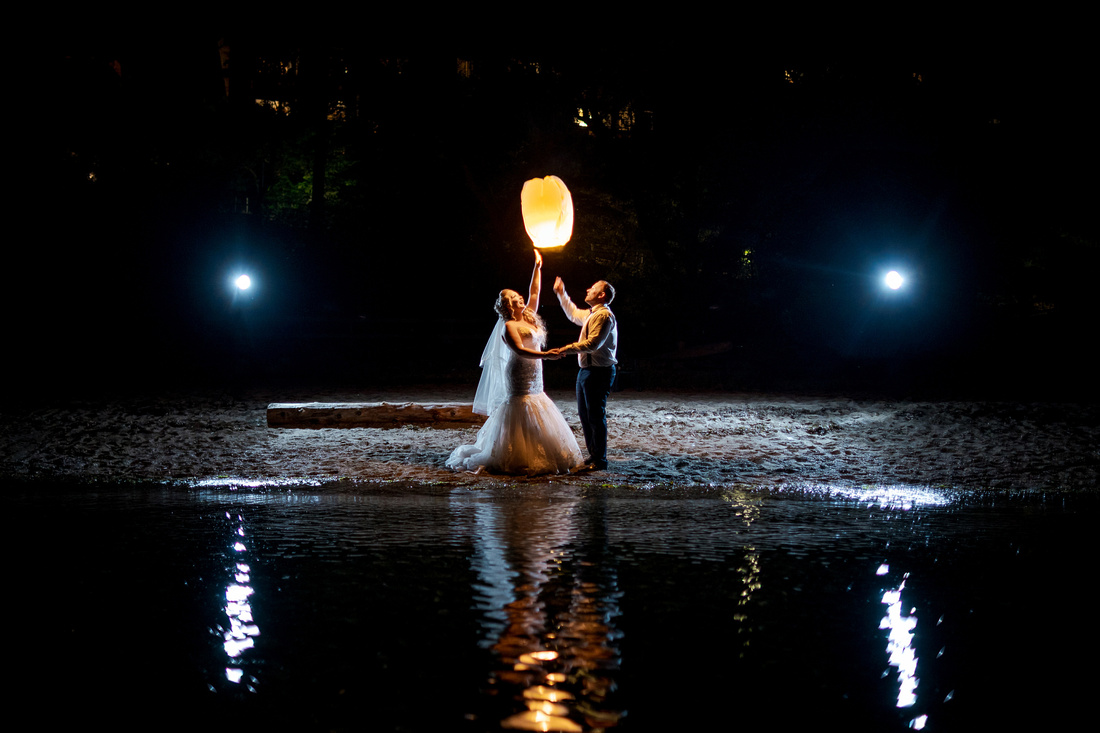 It was the end of a hot day for Brandyn & Erica, what better way to cool off then wading waist deep into the tide? These two had a beautiful lantern for their night shot, and we wanted a little of the ocean reflection in the image! All the light in this photo was created by two strobes, and our "Nice" light! 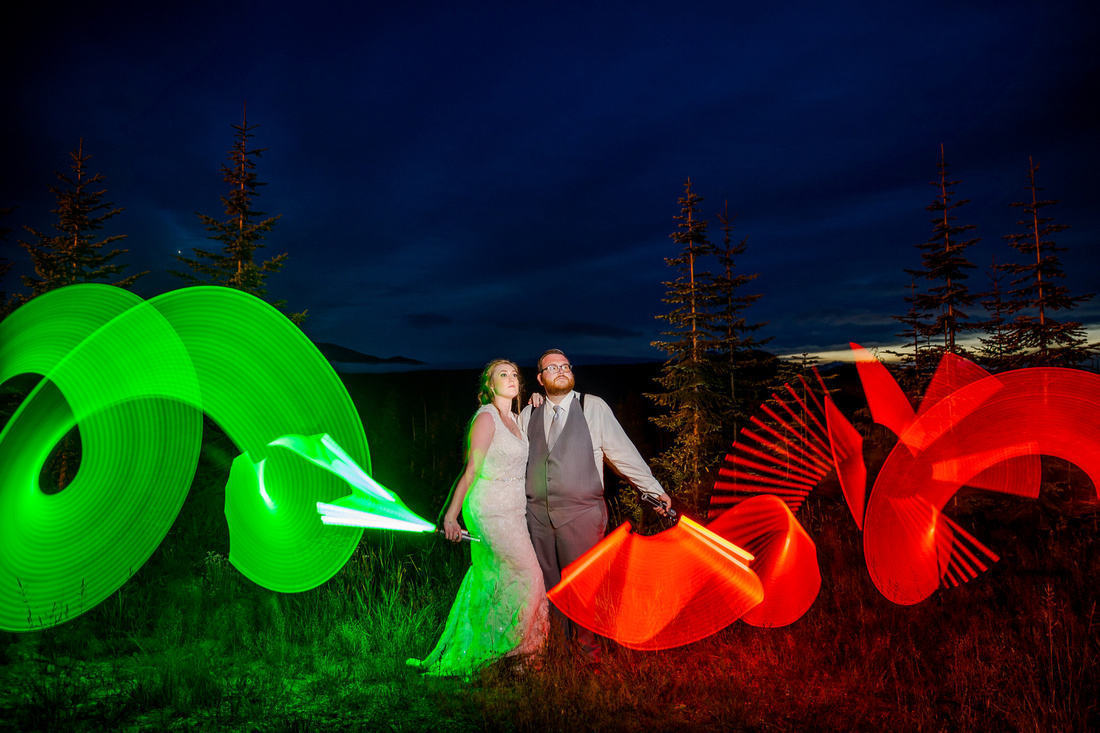 Steve is a big time Star Wars Fan! So when ever we have a couple ready to embrace the Geekside we are there 100%! The light in this image is coming from their ACTUAL Lightsabers, and a single flash! We love this photo because of the team work involved...we had two of the bridal party members run from the outside of the frame in waving the lightsabers and placing them into Rachel-Anne & Alexs hands before running back out of frame! The camera was set up on the tripod with a long shutter, as well as a manual flash! Teamwork makes the Dream-Work! 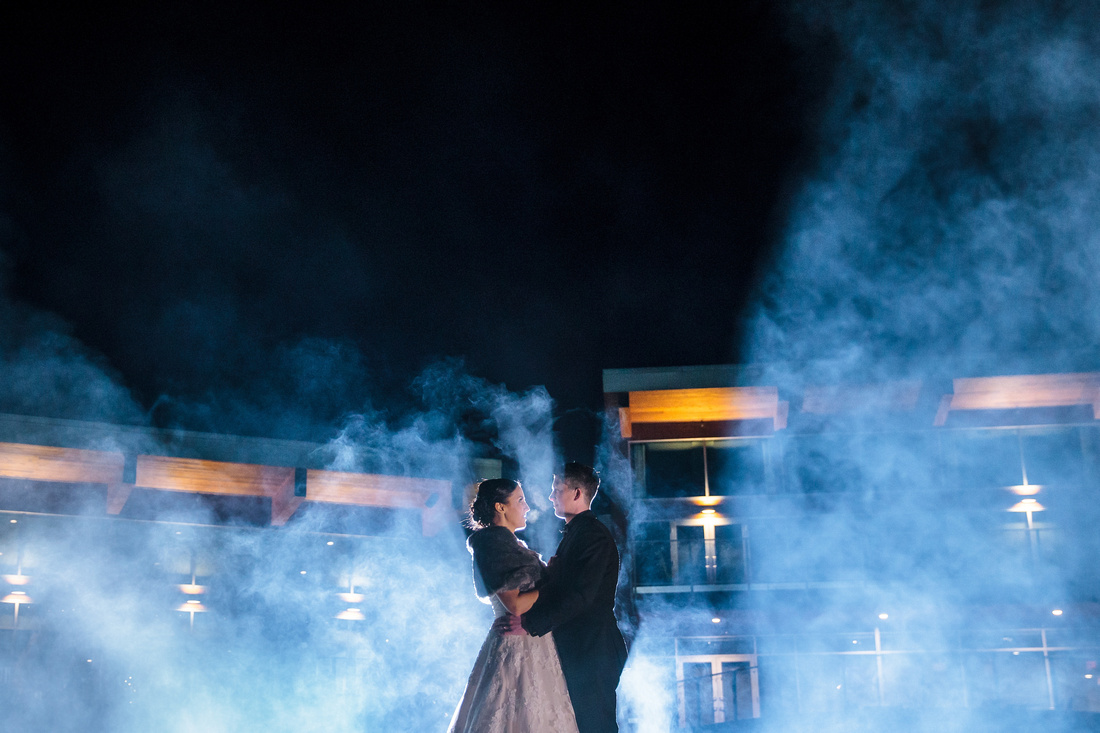 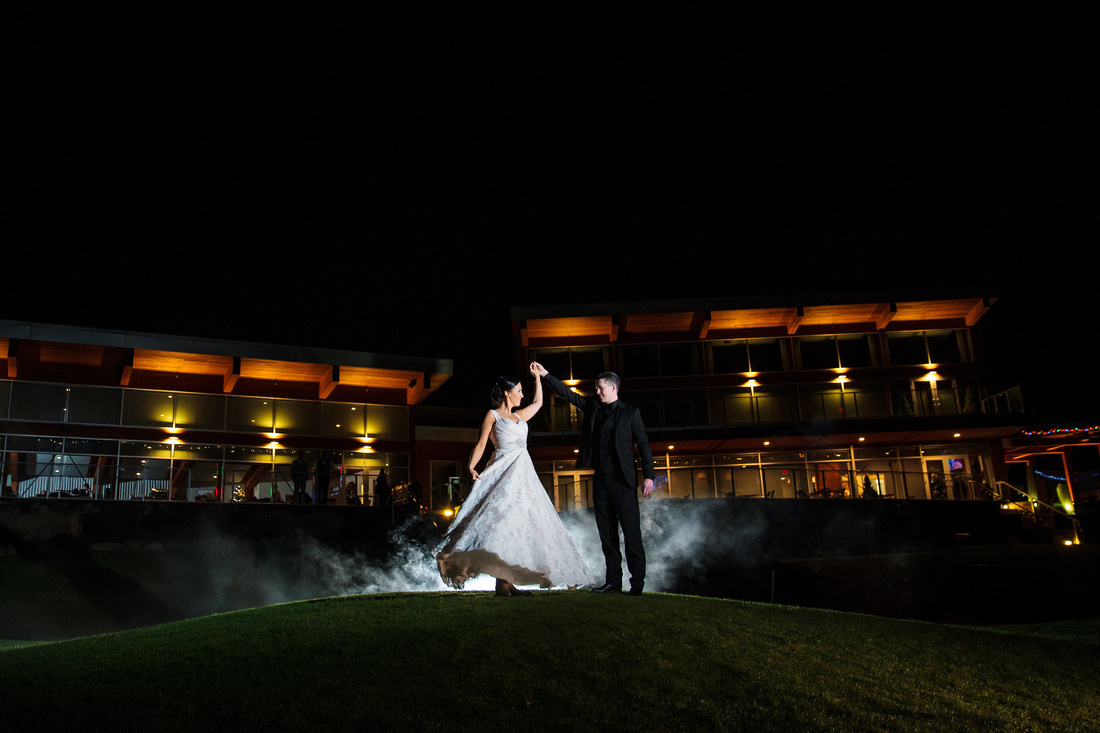 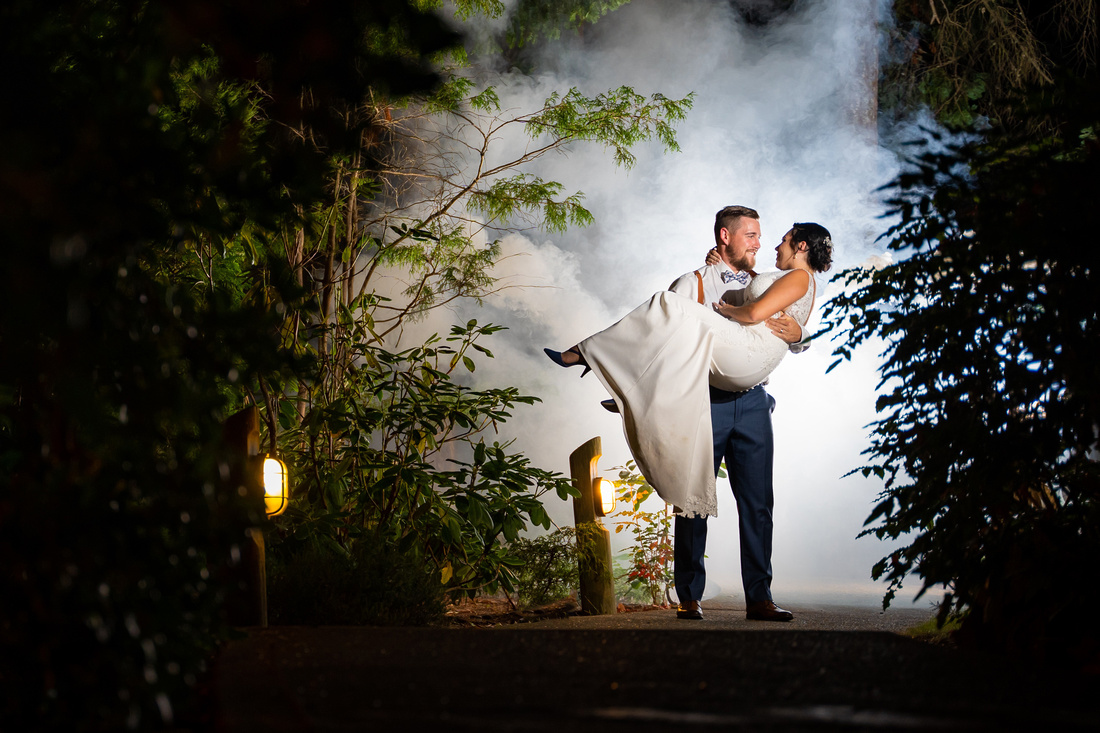 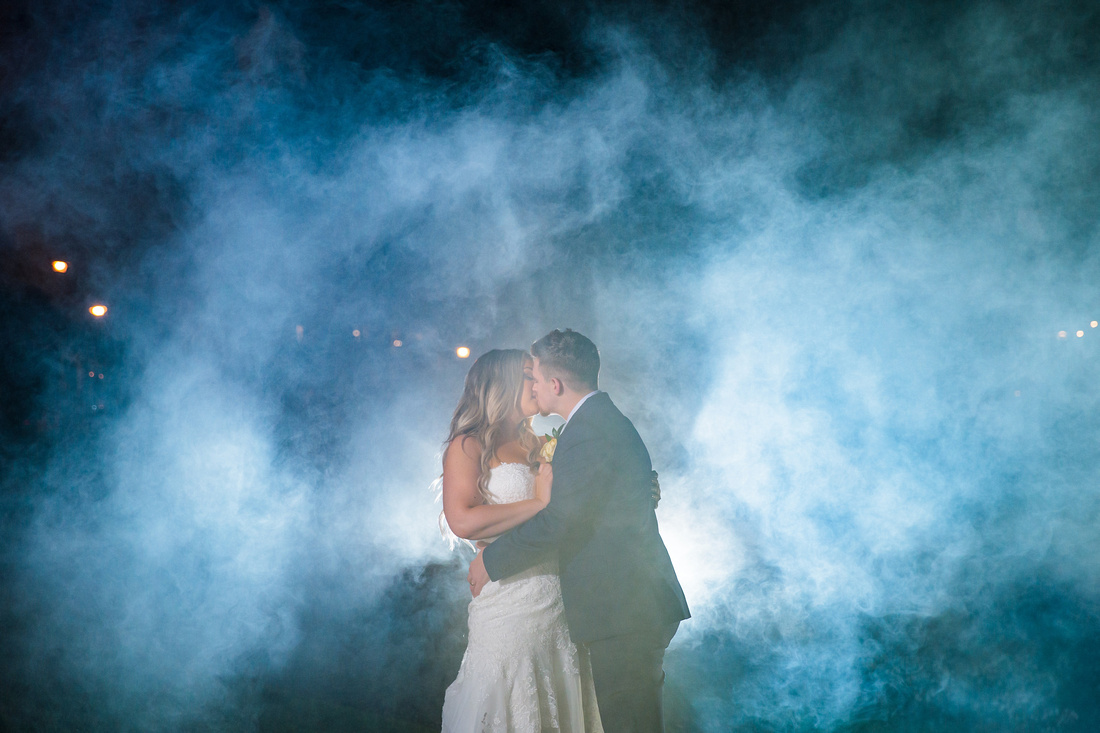 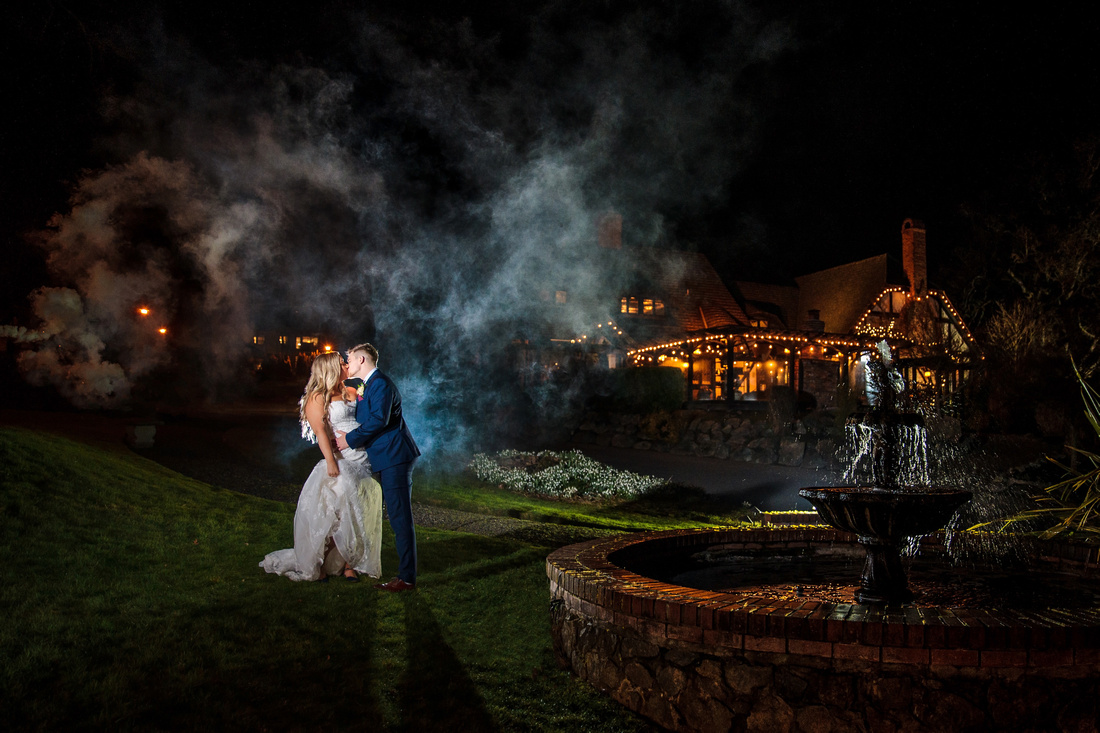 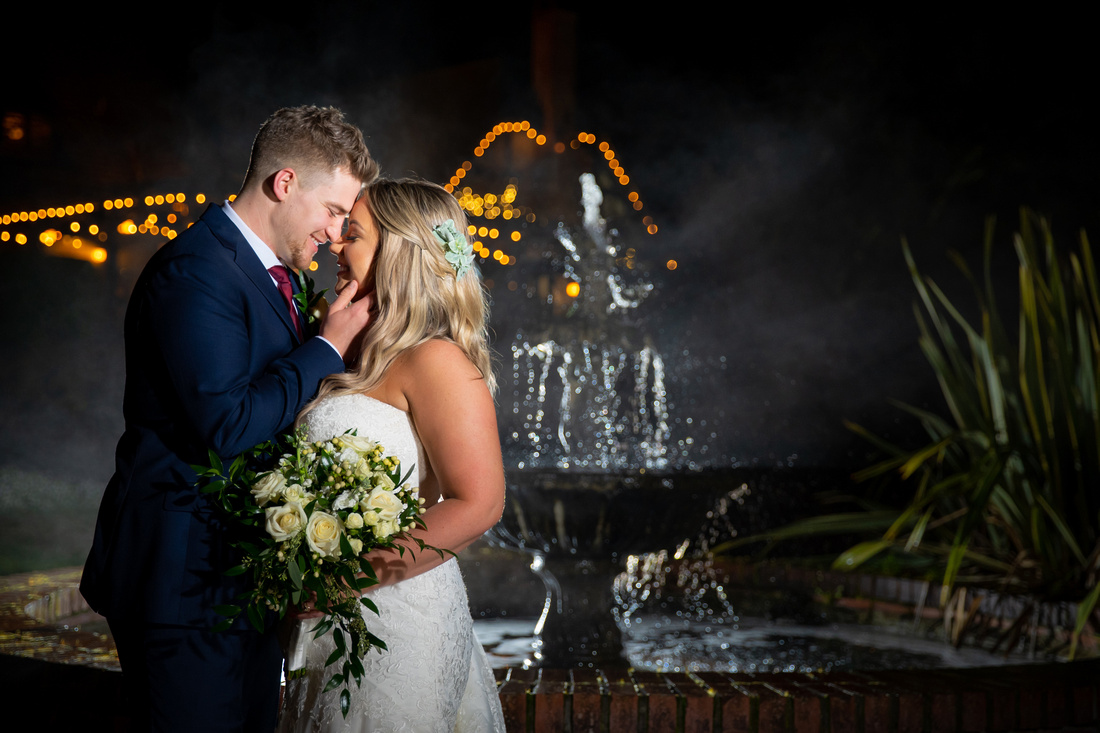 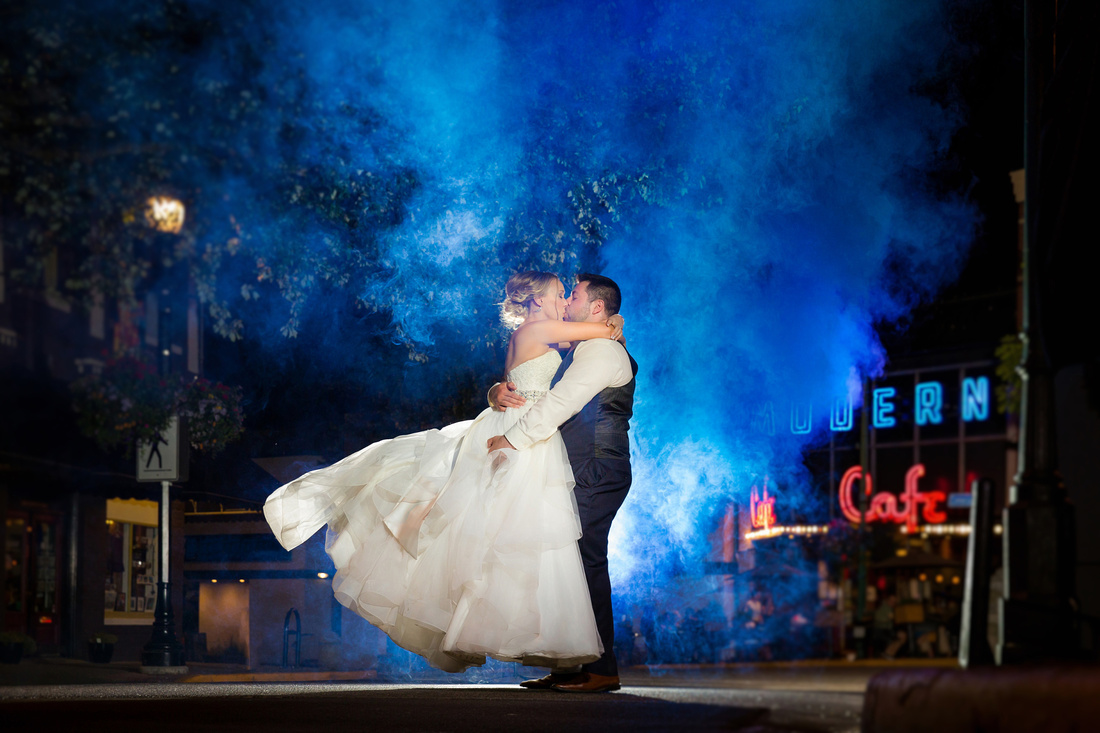 Focused with the Focus app

Smoke grenades made for a dramatic new addition to some of our night shots! When the air is still and the backdrop compliments it, smoke adds a really romantic atmosphere to a night scene and we love the results! These smoke bombs last for just a couple minutes - so we warm the couples up, get all the lights ready, rehearse a couple poses and let er rip! Sometimes these shots are pretty good for a laugh as one of us is usually running around like crazy behind the couple to get the smoke to disperse all over!

Those are just some of our favourites! Do you have a fave? Let us know below in the comments section!